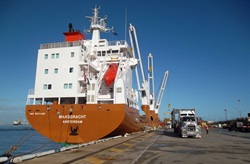 In 2014, the Cleveland-Cuyahoga Port Authority had substantial
increases in ships and cargo. Highlights of their busy year
include: