Rich Wetzel, Co-Founder and CEO of Freshmade 3D, is a result of the 3D printing (3DP) entrepreneurial ecosystem currently growing in the Youngstown area. A graduate of Youngstown State University, Rich spent the summer of his senior year interning at MakerBot and soon began working at the Youngstown Business Incubator (YBI) in 2014 as the Additive Manufacturing Business Coordinator.

When Rich finally brainstormed his first 3DP start-up, he partnered with Brett Conner, Director of Advanced Manufacturing Research at Youngstown State University to launch the idea. The first iteration of the business focused on consulting for 3DP users in high-end auto restoration. They brought on now Chief Operating Officer, Christopher Tomko, and won $15,000 through a YBI AMPƎD competition to further develop their business plan.

In December of 2016, The Northeast Ohio Additive Manufacturing (NEOAM) Cluster conducted a “Market Opportunity Assessment” training which gave Freshmade 3D an opportunity to further research this market and to assess internal strengths and weaknesses. With the help of the training, they evaluated alternative market strategies and business models. 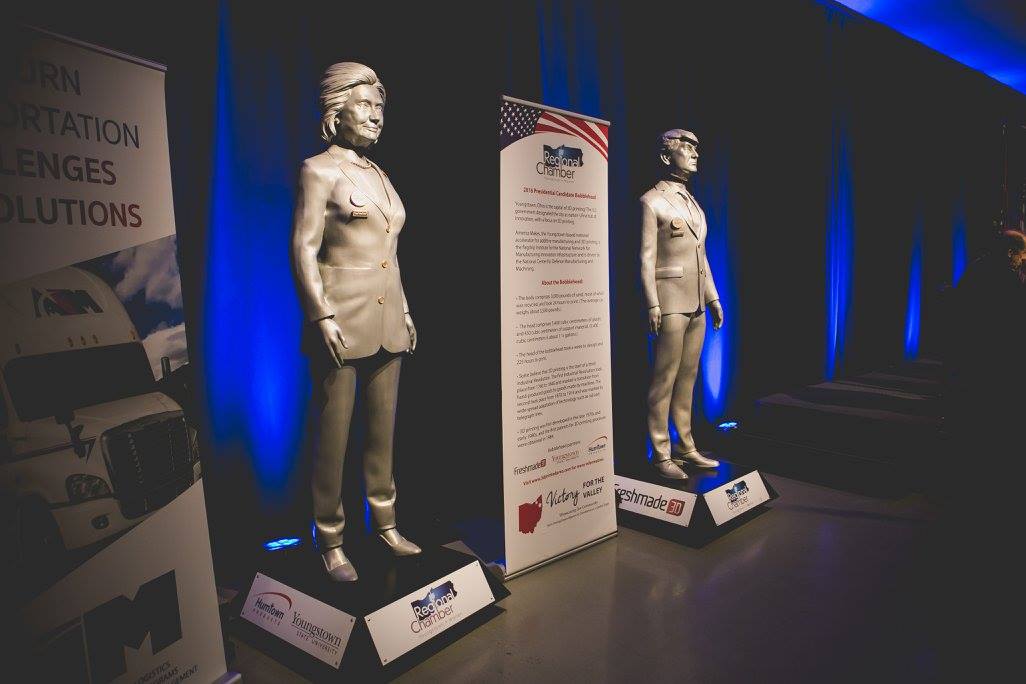 Just a few months earlier, the Youngstown/Warren Regional Chamber had commissioned Freshmade 3D and others to make a life-sized, 3D-printed bobblehead of presidential candidates, Donald Trump and Hillary Clinton as part of the Republican National Convention (RNC), which took place in Cleveland. The project was intended to showcase the advanced manufacturing capabilities of the region.  The bobbleheads stood 7 feet tall! Through the production process of this project, they learned that using FDM would have been too expensive to create the dolls. The team instead used binder jetting of sand through an ExOne machine, followed by resin impregnation. The materials were inexpensive compared to the polymers used in FDM.

They realized after completing the bobblehead project that the process lent itself well to large-scale, 3D printed parts. If they could make these parts more affordably, they could explore markets for large-scale parts such as architectural applications and manufacturing tooling. They found a way to functionalize the sand to create durable materials and pivoted to focus on large scale 3DP. This durable material is called AMClad. The material is so durable that they 3D printed a bowling ball and invited the media to watch them debut the new technology.

In January of 2018, Rick Lucas, the CTO of ExOne, spoke at a quarterly NEOAM Cluster meeting and had a chance to see some AMClad parts on display and found them impressive. Through this encounter, they were able to partner and now ExOne showcases Freshmade products at trade shows like RAPID, the largest 3DP expo in North America, and IMTS.

Through this partnership, Freshmade 3D met a major faucet producer at the ExOne RAPID booth this year. This led to a number of prototyping opportunities which has grown into ongoing business for Freshmade.

Rich has expressed his appreciation to the Cluster for the connections he has been able to make. He said the Cluster does a great job of bringing him referrals and exposing them to new market opportunities.

To learn more about getting involved with the Cluster, please visit: https://neohioamcluster.org/.