Northeast Ohio’s economic development efforts earned high marks in 2016, compared to its performance over the past few years, according to results released by Team NEO and JobsOhio. Team NEO and its economic development partners provided assistance to 75 company growth opportunities resulting in total commitments of 4,853 new jobs, $262 million in new payroll and $1.6 billion in capital investment. (See table below.) 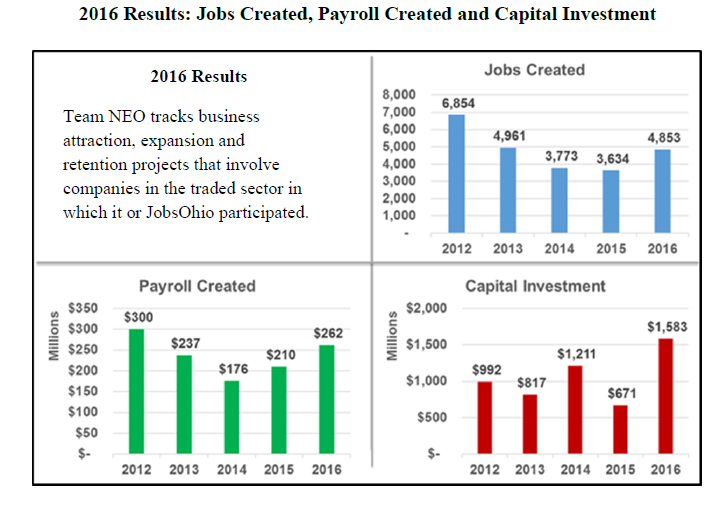 In addition to those results, the economic development network earned commitments for more than 1,600 jobs that did not involve Team NEO or JobsOhio.

Per the latest available revised Bureau of Labor Statistics figures (3Q16), the region appears to be on pace to add a net 8,000 to 9,000 jobs in 2016. Final BLS figures will not be available until June.

“2016 was a great year for our region,” said Jim Clay, Chairman of Team NEO’s board of directors. “Through the national events that happened here, the world saw the benefits of investing in our region, where public, private and philanthropic organizations collaborate to support economic development.”

“More business decision makers are finding Northeast Ohio is a place where their companies can grow and prosper,” stated Bill Koehler, Team NEO CEO. “They recognize we have strong economic development organizations at the state, regional and local levels committed to supporting business growth. We entered 2017 with significant momentum, which we are building on every day.”

In the past five years, Team NEO and its economic development partners have assisted companies that have committed more than 24,000 jobs, $1.1 billion in payroll and $7 billion in capital investment to the Northeast Ohio economy.

The number of new jobs and the increase in payroll becomes even more significant when the multiplier effect is considered, which are the employment opportunities that arise as these new companies and their employees buy goods and services from local and regional businesses.

Team NEO is an economic development organization focused on creating jobs for Northeast Ohio’s residents. In collaboration with our partners, it leads the region’s business attraction efforts, supports business retention and expansion work as Northeast Ohio’s JobsOhio affiliate, accelerates the impact of innovation in the region, and aligns strategies and resources within the economic development network to maximize its impact. In addition, Team NEO provides tools to assist employers in attracting talent to the region. For more information, visit clevelandplus.com.