Team NEO Names Jim Clay Chairman of the Board 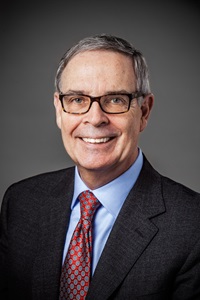 The
governing board of directors of Team NEO announced that Jim Clay,
chairman and CEO of Westfield Group has assumed the role of
chairman for the region’s business attraction, growth and
technology-based business development organization. He succeeds
Ward J. “Tim” Timken, Jr., chairman, chief executive
officer and president of TimkenSteel Corporation and David T.
Abbott, executive director of The George Gund Foundation, who
served as interim co-chairs during the organization’s
transition to begin to implement the regional strategy.

“Jim knows Team NEO well and was instrumental in the process
which led to its consolidation with NorTech,” said Timken.
“His leadership will be valuable as the organization
leverages its new strengths to help accelerate the pace of job
creation in northeast Ohio.”

“It is an honor to take on this role,” said Clay.
“I am committed to working with this dynamic board to help
our region to compete globally.”

Timken and Abbott step down after acting as co-chairs for the
Regional Competitiveness Council (RCC) and interim co-chairs for
Team NEO. They were instrumental in leading a steering committee
that recommended a new regional economic competitiveness strategy
to accelerate northeast Ohio job growth. Both will continue to
serve on the board and provide their leadership and experience to
the organization.

“We are tremendously grateful for Tim Timken’s and Dave
Abbot’s leadership and guidance during a period of
significant change and growth for Team NEO,” said Team
NEO’s Interim CEO Grant Goodrich.

About Jim Clay
Jim Clay is the Chairman and CEO of Westfield Group, a
customer-focused insurance and banking group of businesses
headquartered in Medina County. In business for more than 167
years, Westfield is an active participant in a variety of
non-profit, business, civic and philanthropic organizations that
support the social and economic development of the entire
region.

During Mr. Clay’s 35-year career with the company, he has
played a role in nearly every aspect of the business, from a
successful career as an insurance underwriter, to president of the
insurance operation, to eventually taking the reins as CEO. Under
Clay’s leadership, Westfield’s surplus exceeded $1.9
billion, the most in the company’s history. Recently,
Westfield announced that Mr. Clay will retire in March 2016,
leaving the company well-positioned for the future.

Mr. Clay is a graduate of The Ohio State University.  He is a
trustee of the Property & Casualty Insurers Association of
America and co-chairs the Insurance Industry Resource Council,
Ohio’s workforce initiative to support the industry’s
domestic carriers. Mr. Clay is active with a number of economic
development organizations in northeast Ohio including the Greater
Cleveland Partnership, Team NEO and Cleveland’s Playhouse
Square Foundation.